Is It THAT Serious? 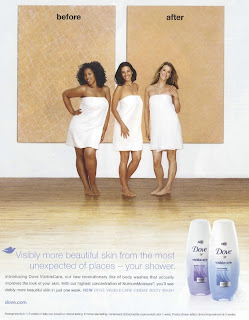 Some people still manage to find racism in every aspect of life - even in Dove ads.
I guess the argument is that the thick and dark woman is the 'before' while the thin white woman represents the 'after'.
Some even say that this was an intentional slight because Unilever (Dove's parent company) also makes skin bleaching products.
For realzz?
The next thing you know someone will say that Close Up (another Unilever brand) is racist because it helps to whiten ones teeth. 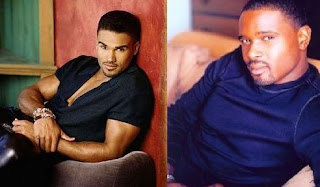 The odd thing is that many of these same women bemoaned the fact that Eddie from Family Matters took over as Malcolm on The Young and the Restless. 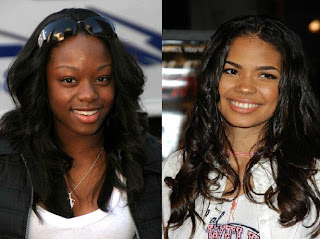 I wonder if they even noticed that Damon Wayans replaced a dark actress with a lighter one on My Wife and Kids? 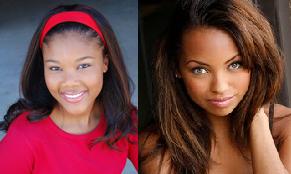 And why did the 'Black Woman's Friend' (Tyler Perry) replace a dark actress with a lighter more telegenic mode on Meet the Browns?

Multinational corporations aren't known for being culturally sensitive, but most make an effort.
When Disney finally created a Black princess, "Oh, she's too light, and why did she have to be the daughter of a seamstress?"
IMOHO - The problem is not how others see us - our biggest problem is how many of us see ourselves.
Posted by uglyblackjohn at 8:32 PM

Well most people are stupid! Once you start your understanding from that point you'll realize there's no solution to it.

Ha! I just wrote about this. Didn't see that you had.

I'm fairly positive it's quiet unsavvy ad-making. But I'll be snarky about it, anyway. :)

Why do people find ANY excuse to start a racial fight? And you hit the market with the Dove ad. Clearly the background is showing ginormous pictures of skin before and after using Dove. I think it's time for people to just stop. And why is it that white people can never claim racism? Like the fact that there is a channel dedicated to ONLY blacks. Black Entertainment Television? No way in hell would they allow a station called WET or WOT Whites ONLY TV!! The world would be in an uproar! And it would never end! Just like the fact that whites are still being punished for slavery that the current people living had nothing to do with and the current blacks living were never slaves. It's just ridiculous that they find any tiny miniscule reason to use that race card and go on and on and on about it seriously for months and months and months until the next tiny little thing comes up then they go on about that and then they get guilty white people sending money to all their supposed it causes like black lives matter and all that. Well White lives matter too and Hispanic lives matter too and I would say all lives matter but if we started the group saying White lives matter because one white person got shot by a cop, which has happened a lot, whites as a race would be apologizing for it for another Thousand Years! I just don't understand why people have to see color and can't just separated and understand a crime is a crime no matter what color you are. And if someone switches an actress on a TV show so what and the funny thing is that when the actresses or switch to a lighter black actress on TV shows they are 90% of the time switched by a black person who's running the show. So how is that racist if a black person changed the character to a lighter black person? So the black person is now racist against blacks? Just plain ridiculous! And when that happens they do accuse the black person of being racist of blacks and wishing that they were white. Or if a famous black person marries a white person then that black person is racist against his own race and secretly wants to be a white person. Why don't they say anything about the white person in the relationship? We never say oh my gosh that white person is with a black person they must be racist against whites and want to secretly be black! Nope that is never said because it's just a ridiculous notion and even if someone thought it they would be chastised for the rest of their lives for it! SMH it will never end and to be honest it's only getting worse and will continue to get worse. I find that incredibly sad because it's an unnecessary evil that doesn't need to happen. Fabricating racism is so ridiculous and that energy could be focused on search better productive things. Yes this was super duper long but sorry couldn't help it. And about the switch on the My Wife and Kids TV show; I didn't like the original actress because I thought she did a really bad acting job and she just didn't really fit in. The actress they replaced her with is actually a much better actress and plays the part really well! So it was, in my eyes, the need for a better actress to play that part.