Actually, I've always hated the limited value many Blacks placed on their history, culture and even  themselves.
I hated that many Blacks would still identify more with slaves than those who fought against oppression.

(People still trip that we maintain a small patch of cotton on the family farm.
During summers, my father would join family members in picking cotton to take to market so that they could buy school clothes and supplies.
(I picked one piece, just once, so that I could say that I had picked cotton.)
But these were/are family farms in Louisiana - most were/are owned by the Black inhabitants.
Picking cotton was a necessary chore required to generate income.
There was no shame in picking cotton.
And just because I had actually picked cotton - I was never a slave.)

No,
one movie cannot solve the inferiority-complex many Blacks seem to have nor will it change the minds of those who still imagine that Zipporah looked like Yvonne de Carlo in The Ten Commandments.
But Black Panther is a step in the right direction.

I had to laugh when Atlanta's Hartsfield  jokingly posted departure times leaving for Wakanda.
But at least it wasn't Soul Plane. 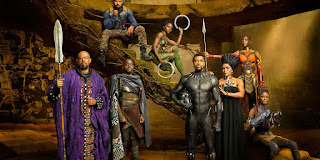 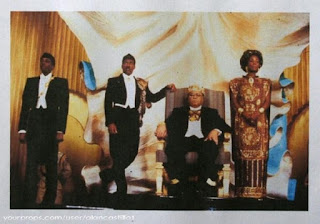 Black Panther may just be the right movie at the right time.
The Black Power/Civil Rights movement, the belief in The Talented Tenth, Nat Turner and as far back as (and before) Chrispus Attucks - there have been Black men of volition who wanted better for themselves and others like them.

Actually, I like the vernacular fashion in the film.
We've come a long way from Zumunda to Wakanda - from the jewelry that looked like they raided the fancy cheese section at their local Gelson's in Coming to America to the more historically correct costumes in BP 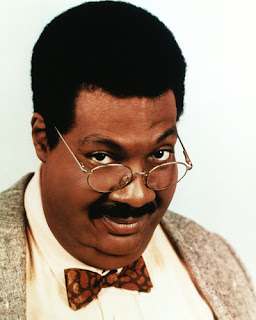 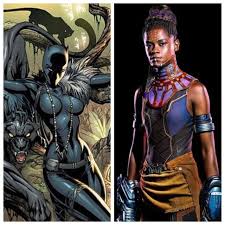 BP shows this generation that one does not have to be unattractive, fat or coonish in order to be smart.
Shuri is a smart, clever (not cartoonishly silly), attractive and she could probably still kick your ass.
In the age of Neil Degrasse Tyson, there is no need to portray Black nerds as Urkel. (Well, Degrasse Tyson does kind-of come across as a grown up Urkel.).
I'm sure there are plenty of smart Black people who can still throw them hands (yet still be likeable). 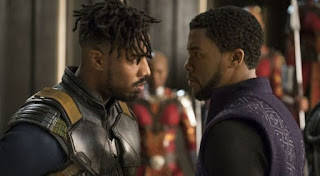 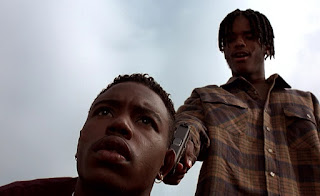 Black on Black crime?
Nah, man.
The fight between Kilmonger and BP was over ideas/ideals not over drugs, hoes or a dice game. 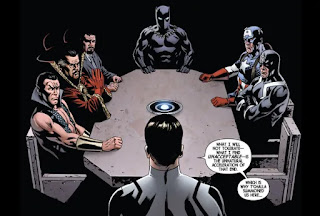 Honestly, I'm more of a Silver Surfer fan than one of the Black Panther.
Sure, I like that BP possessed enough foresight to excuse himself from Marvel's Illuminati.
But I never identified with him.
While he wasn't a former pimp, drug dealer or criminal - his story wasn't my story.
I was influenced by the real Black Panthers whose ideologies seemed more in line with Kilmonger's beliefs.

'Woke'? Ninja-please.
Most of y'all should never have slept through school and you'd possess the requisite pool of knowledge required to defend your beliefs beyond the memes and tropes put forth on facebook and YouTube posts.
We were inculcated with the belief in #blackexcellence not the belief in thinking that mediocrity was the same thing.

And I get it.
Baby steps.
There are still many who believe that the Cosby Show was a 'white' show starring Black actors.
There are many who believe that if it's made/owned by whites that it must be superior.
I get that all the hashtags give you the feeling of actually accomplishing something - that you make a difference.
I get that many of you feel the need to live vicariously through celebrities and fictional characters in order to feel empowered.
I get that most support Kaepernick but that they still work for companies which have worse historical practices concerning race than does the NFL - yet they won't forgo their paychecks.

I get that Black Panther (Like 'Django'.) gives many pride in their being beyond that of being servants, criminals or slaves.
I get that most dumb people have smart phones and most of their real history is just a few clicks away.

I get that BP is not reduced to a sidekick, a Magical Negro nor does he benefit from a White Savior.
I get that this fictional character is, for many, the first time they have seen a Black person being viewed as an equal (See: Black Panther in Marvel's Illuminati).

Proverbs 23:7 states,
'For as he thinks in his heart, so is he'.
I get that many thought they weren't shit so they proved themselves correct.
I get that most are surrounded by negativity so it's become the expected outcome.
I get that most lack the faith required to do the work that is required to create a real and lasting change.
But it has to start somewhere,
and my hope is that BP is the seed that will develop into the realization that we can do better.

Posted by uglyblackjohn at 10:19 AM 2 comments: 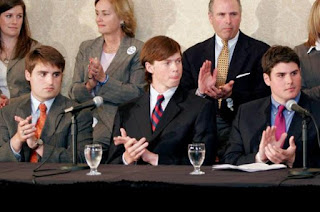 Back in the day, I was a fan of the UNLV Running Rebels and the Georgetown Hoyas - Duke beat them both.

Duke is a school and team that's easy for a suburban Black kid to hate.
Okay. maybe 'resent' would be a better word.
'Envy' might even be the most accurate word.
Privileged kids going to an elite school who still manage to win?
It's easy to envy/resent/hate such kids which makes them easy to scapegoat.

After the circus of the rape hoax had died down, one of the accused made a statement about the broken judicial system and how that if even he and his equally 'privileged' teammates could be treated so poorly (even with all their money, resources, and whiteness), it must be even worse for poor urban kids who are wrongly accused.

The takeaway should not have been that white dudes are victims of an overly aggressive PC culture but that everyone is a victim of an unjust and inequitable judicial and enforcement system. 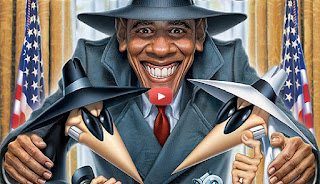 Which leads us to Bush/Obama and the abuse of policies which were the result of the Patriot Act.

I also hate Trump.
No, I don't resent nor envy him - I'm just not a fan.
And, no - not because of his wealth, his pretty wife (Don't Hate, she's not an ugly woman.) nor his fame.
I don't like the guy because he is a Last Man or even a Superfluous Man who is pretending to be an Uber Man (Ubermensch).

Did Trump actively seek to influence the last election in his favor in an illegal manner - probably not.
Is he an idiot for complaining about even the smallest slight on social media like a middle school girl - yes, it's indecorous, as POTUS it should all be beneath him.

His whole 'What about Hillary' and 'Obama did it too' are childish responses to adult problems.
Why can't he just take his licks like a man and go through the process the way the Duke 3 did?
Why can't he focus on how his predecessors abused and expanded their surveillance powers to the point that even a sitting POTUS (and those around him) can be harassed by those who are working for the Cathedral?

* Trump and his team will probably all end up going down for tax evasion or money laundering as a result of the Mueller investigation, and not any sort of collusion with Russia.
I just hope that before he goes that he will draw attention to and make changes to the way no one truly has any right to privacy.

Posted by uglyblackjohn at 2:43 AM No comments:

Who Did it Better?


Posted by uglyblackjohn at 10:44 PM No comments:

As Eagles fans looted, rioted, vandalized and literally ate shit - the po-po seemed unbothered.
Sure, most of the perpetrators were working-class white dudes - the same dudes who seem to riot after hockey championships - but why did law enforcement respond with little more than a nod and wink?

Sure, burn things up to celebrate a sport which some choose to protest for 'political' reasons but don't dare protest anything that is actually political.

The thing is: protesting injustice is an attempt to change the system - rioting over an almost meaningless game (At least as far as most people's personal lives are concerned.) is supporting the same system.

Sports are intended to to distract the masses from things that actually matter.
As long as anger, jealousy, hatred and other emotion can be directed at entertainers, no one will pay attention to the deeds of either the Official Government nor the Permanent Govern.

As longs as the proles act and think like proles, the elites will remain safe in their roles in our plutocracy.
Posted by uglyblackjohn at 10:58 AM No comments: 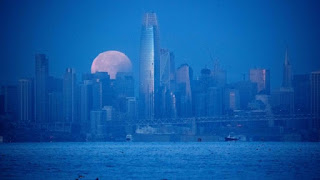 Maybe last week's Super Blue Blood Moon, highlighted with an eclipse, was an omen for Trump. 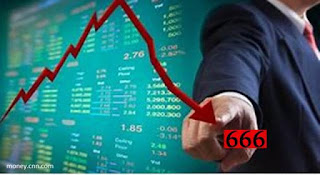 Last Friday's 666 point drop on 2-2 would be almost doubled the following Monday. 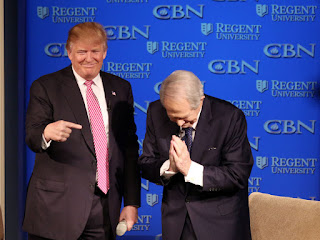 Then Trump supporter (And the only man who could rival The Donald for the number of idiotic statements made.) Pat Robertson suffered a stroke. 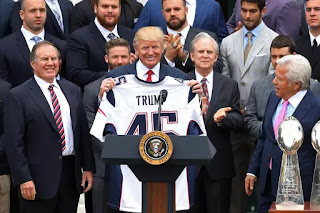 And then the Patriots lost the Superbowl to the Philadelphia Eagles.

Sure, yesterday's 1200 point drop in the Dow may be just a market correction but more than likely it is a sign that the investment bubble is about to collapse and time may be running out on the Trump presidency.
Posted by uglyblackjohn at 9:26 AM 1 comment: