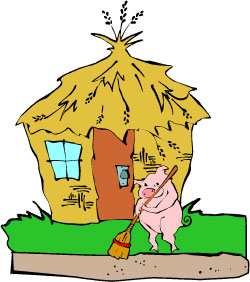 About the growth of the economy?
Dow Jones has nothing to do with most of us - it is just one of the preferred casinos at which the financial elite play (with your money).
Fast growth seems to be what Americans desire, but have we not learned?
Don't we remember the story of the Three Little Pigs?

In an effort to quickly build a home with maximum profits, one pig (Wall Street) chose to use inexpensive straw.
Sure, the house went up quickly but it could not stand up against an attack.
The next pig (The Government) decided to use sticks.
Sure, this had more strength than the house of straw but it too failed against an attack.
The third pig (US) chose to take his time to build a solid structure.
Size and speed were not important - only strength and stability.
This house withstood the attack and enabled all three pigs to survive.
Posted by uglyblackjohn at 9:26 PM

Well in this story the greedy pigs built their houses out of straws and resold them to another greedy pig who hoped to flip out of that before the wolf came along. So in a game of hot potato the greedy pigs got slaughtered by the wolf.

Instead of saying they were gambling the dead pigs are crying to the government for allowing them to build with straw in the first place.

So it's human nature and only a couple of superhumans understand to build something of quality. But the fantasy and propaganda of quick money lures many a Sucker.

This time we had a whole tootsie pop factory full of Suckers. That's why even those who aren't a Sucker have to deal with this.

While all the pigs are arguing about the rules of building houses, and if there should be rules, they all missed the point which is that our economy no longer even builds houses but is based on us paying each other to live in houses and then selling the same houses back to each other while every one else is doing the building.

Well we haven't built anything in the USA since the 80's. It's only now that critical mass has come into being. But by the time we all realize it it's beyond too late.

The whole country plays Hot Potato aka how many Suckers can I sucker and not end up holding the potato. As long as everyone goes to Walmart the businessman sends the jobs to where you can have a plasma tv for 500 bucks.

Also what pig do you know that builds anything. It's just not their nature.