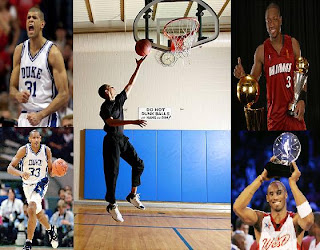 Maybe Barack Obama needs to more like Dwayne Wade than Grant Hill,
Or more like Kobe Bryant than Shane Battier.

Maybe Barack Obama can't help who he is or the way he attempts to lead.
Maybe Mr Obama was schooled a bit too well in the workings of our government.
Maybe Mr Obama was too successful at being acculturated.
But don't blame his being a soft "Uncle Tom'" Duke-like president on his upbringing.
Dwayne Wade grew up in a town which is 93% white.
Kobe Bryant lived a fairly privileged life in Europe.
I like Grant Hill - he has game.
But he doesn't dominate they way a real leader should.
Duke players seem more concerned about being liked than they do with getting the job done at the next level.
Shane Battier is a solid player but he isn't winning championships.

My message to Barack?
Be more like Dwayne and less like Shane.
Be more like Kobe and less like Grant.
Jalen Rose says that Duke only recruits "Uncle Toms",
people who will do whatever Coach K tells them to do.
(But Coach K also led D.Wade, Lebron and Kobe to gold medals.)
Maybe it's time for Obama to step up his game to better compete at the global level.
Maybe Barack shouldn't worry about missing a game winning shot (as Kobe did early in his career) and begin to focus on a dominant long-term career.
Or maybe Barack should just stop trying to please everyone, make a decision and shoot the damn ball.
Posted by uglyblackjohn at 3:26 PM

I never wanted to bring that up but I believe it's the truth. He's missing the I DON"T GIVE A FVCK angle to his personality. Kobe is a ass only because he'll tell you that you can't stop him.

Battier and Grant are great role players but they lack the killer instinct. Yes, Duke usually is for Uncle Toms when you think of trying to get the aggressiveness out of your game.

Obama has lost his aggressiveness. I mean Bush was a idiot but he was aggressive. So while I don't call Obama a Uncle Tom I think what everyone is waiting for is him not passing the ball to Shaq and cursing every once in a while at the post game conference.

People may not like the attitude but when you win they'll shut the fvck up!

Right... Obama is acting like a good role player but not like a leader.
People voted for Change - not more of the same.

Democrats, Republicans, two wings of the same bird! LOL! I don't delude myself anymore. It is what it is, it could be worse. I'm still glad I'm an American.

your president takes a pill that supresses the "real nigga" mentality he developed in the ChiTown era. Backthen his nickname on the courts was O-Dogg and he'd let his pants sag and his nuts hang...not so much today...stop trying mang, there is no way you'll ever get everyone to like you or how you play...do the damn thing