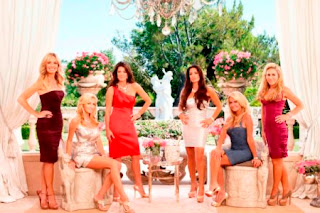 Of all the Real Housewives shows, only the women from Beverly Hills actually have liquid assets and access to resources which would place them among America's social elite.
The rest are just Fakin' Da' Funk. 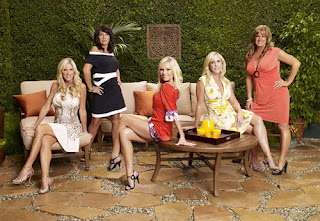 When the Real Housewives of Orange County premiered - many people thought that these women lived the lifestyle of the rich and famous.
Big hair, big cars, big houses, big boobs and even bigger mouths led many to think that this is how the rich must live.
But what many failed to understand is that all these things only led to bigger bills.
O.C., New Jersey and the A.T.L. - these women are going broke.

What many people failed to realize is that rich people work (Well.. at least they get paid for providing some type of service) for a living.
Oprah goes to work every day.  Bill Gates, Warren Buffet and Donald Trump are always building assets not wasting resources.
Rich people do not waste resources on lavish shopping sprees, vacations and dinners which they cannot really afford.

But many middle Americans bought into the idea of a consumerist lifestyle.
Many imagined that it was better to pay someone else for services instead of getting paid to provide the same services themselves.
Many thought that bragging about how much one spent on an item was more impressive than bragging about how many items one sold to a bunch of suckers.

I recently caught up on a few of the Real Housewives shows and all I can say is that, for the most part, these women are just Fakin' Da' Funk.
Posted by uglyblackjohn at 10:34 PM

Status seeking is so insidiously wired into the primate nervous system that it's the absolute equivalent of behavioural crack cocaine.

Once you come to really and truly understand the nature of a thing, you never kid yourself about what you can reasonably and prudently expect that thing to do...,

But a lot of things are hardwired into primative nervous systems.
One aspect of religion attempts to teach that "Winning" is not in the best interest of the person or the group.

I'm really fascinated by all the Real Housweives. Most especially by the RHoBH--I think because they're physically so close to me and I could (maybe) conceivably run into them one day.

I try to watch them and figure out what it is that they do to make their lives look like that. Not that that's the end all and be all of existence. But career success is...fun at least.

Have only gleaned a few secrets--mostly their amazingly intense eye contact and thorough thorough networks of people.

@ MissOreo - The thing is to just be yourself (you'll pick up the nuances just from being in the environment).
Don't chase popularity or acceptence - just let everyone come to you - that way you will be able to dictate your own terms.