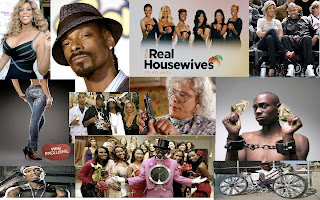 The hood used to be exploited by those who never lived in the area.
Today, many from the hood have benefited by selling the hood as an identity, as a brand.
Ebonics has become an accepted dialect used in advertising, entertainment and even in soft news stories.
Ghetto Fabulous has taken the place of tacky, tawdry and gaudy.
Big rims, big lips and big butts have become desirable for many non-Blacks living in the suburbs.

While reading a post at SeeNew's spot - I noticed a graphic which pointed out potential evolutionary changes.
Maybe this applies to humans as well.
Maybe we shouldn't focus on teaching those from the hood to pretend as though they grew up in the hills.
Maybe the most efficacious method to transform ones life should be to teach everyone to use what he already has or knows as a starting point.
If most people tend towards the average (whether genetic or environmental) - and that average is thought to be substandard - maybe we should teach those from the hood to accept their 'hoodness' but to build on it.

There is nothing wrong with washing cars for other people to make a little honest money.
But the next step is to rent a vacant building, get the proper licencing and permits and then open a hand car wash.
When the business grows, hire employees to do some of the work.
When the business grows again, rent another building.
Keep doing this until you have a chain.
Keep the chain until you can form a franchise with people paying you just to use your name and methods.
Link stands, baking cakes and pies, selling used tires, landscaping, whatever - the model should work for anything for which their is a market.
There is nothing wrong with getting dirty and doing some work.

But the problem seems to be one of status.
Many people will take less money if the job requires wearing a suit and it comes with a title.
Walmart is a cheap store but it's primary owners are rich.
Nordstrom is thought of as an upscale store but it's primary shareholders are not as rich a those of Walmart.
There is more money to be made by selling inexpensive goods than there is by selling luxury goods.
With the problems of the hood being exacerbated by Black-flight - maybe we should try to create a new class of shop owners and professionals in the hood.
The new businesses could then hire others from the area.
Maybe the best way to help the hood is to help it help itself.
Posted by uglyblackjohn at 2:05 PM

Who was that Booker T. Washington who said drop the shovel where you are.

I think on my site I try to push this same understanding. If a college kid gets 30K a year and will top out at 50K in the next 20 years then a kid who knows how to make money already can beat him.

Just like you mentioned it's the enterprising way of seeing a Hustle that takes it to a legit business. Most people who come from the hood want money but they are intimidated by the crossover process into being a business. We have millions of excellent salesman walking through the hood selling crap.

The way you help someone is to point out their strengths and create avenues for their strengths to sustain them. After they are confident the next step to creating a business is within reason and reach.

If Walmart can sell crap then the avenue is open for everyone. Plus Walmart is usually a far drive from the hood so the same elements can work in the hood. Afterall this is what Chinatown, Koreatown or any immigrant town is about. It's not quality it's quantity and convenience.