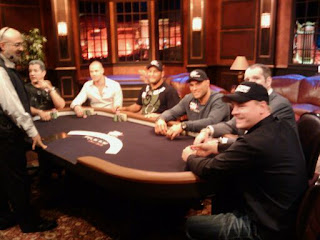 "Like Chess and Checkers", "The Whole Nine Yards", "All In", whatever.... .
These analogies are used to give the listener a better mental image of what is being discussed.
If one cannot connect the dots using straight talk - analogies, metaphors and similes are used to convey the concept using a mental language which the hearer better understands.
(Although the overuse of such terms causes them to become cliched.)

But an interesting (to me) show featured UFC fighters playing poker against professional poker players.
Getting Ones Ass Kicked or Losing $150,000?
Which would hurt more?
Sure, the UFC guys would kill the professional poker player inside the Octagon - but how would skilled fighters respond outside of the cage?
The odd thing is that each fighter played very well.
Each fighter understood that even the slightest miscalculation could result in their being knocked out of the game (and broke).
Each fighter took a chance when the payout outweighed the risk.
Each fighter understood the power of feigning weakness to draw an opponent in, bluffing and making adjustments to gain a more favorable position.
The fighters played pokers against skilled poker players the same way they would fight a skilled fighter in the cage.
The next time I get in a fight with someone - I'm watching him play games first.
Posted by uglyblackjohn at 2:23 PM

While the game already helped the skilled. Using cliches or even encouraging the unskilled to play games like it translates into something more serious is a lie.

In your example the UFC fighters already understand discipline and the like. So they are actually transferring their real life skills to a game not vice versa.

But EVERYTHING is a game - or some version of one.
People use games as practice.
Sports were created as practice for wars.
Games were created to initiate a thinking process.
Unless one is going the Personal Service/one-on-one route - games are used to predict behaviors of groups.
Games have a value - but to what extent and to whom is the real debate.