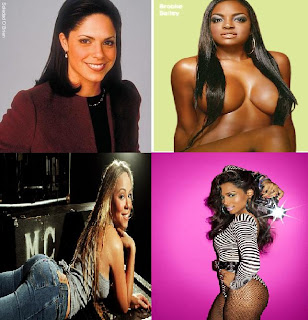 O'Brien, Bailey, Carey and Ciara - all can be traced as far back as (at least) Ireland. "Their slave master probably gave them their last names.", some might say.
Because of King James II, Charles I and Cromwell, most of the Irish immigrants were too poor to be Southern slave owners - and after the 1798 Irish Rebellion, many Irishmen in America were slaves themselves.
It gives the term "Black Irish" a whole new meaning.

But how do we celebrate this in America?
Since Juneteenth was created to celebrate Emancipation three years after slaves were set free - let's celebrate Black St. Pat's the Wednesday before Saint Patrick's Day.
(Well, this is the reason I gave for having a BSP's the day before the actual holiday at one Black-owned club. In reality, the club wasn't open on Thursdays and I already had the promotions in place. We celebrated with cheap Jameson's Irish Whiskey (provided for free by the liquor reps), green beer with huge pots of crawfish (they're in season) and Okra and Shrimp (this is the Gulf after all) given away for free. Branded shirts, hats, etc. were also given out to all who came. )

"Black St. Pat's" the Wednesday before Saint Patrick's Day?
Who would turn down another drinking holiday?
Posted by uglyblackjohn at 11:58 AM

Genius!
I've always thought about owning a drinking spot. Over here it's where the money is, even though it's mainly a male dominated business. My sister and I once toyed with the idea, but we chickened out. But the idea is still there. I bet I wouldn't be so damn broke!

I go to lunch at least once a week with someone who wants to buy a club for me.
The hours are too long and the headaches too many.
I'm pretty good at building hype and generating a crowd while using minimal resources so a lot of people want to back me.
I'm pretty good with most people (even though most bore me to death) and seem to attract a crowd.
I use a win-win aproach to get as many other business people as possible involved in promotional nights so each club has it's own set of regulars.
You wouldn't be broke but you'd be too tired to spend the money you'd make.

I have a friend who is Irish, who's name is Steve. According to him there are two basic types of Irish, lace curtain Irish and shanty Irish (black if you will). The main difference between the two are that one is rich, the other poor. One will push the dishes out of the way in the sink before he pisses in it.

I THOUGHT blacks who had IRISH names were from their white MAMMIES who were bondswomen (mammy being gaelic for mommy) Most blacks who have white blood, have IRISH blood. Check James Earl Jones and Ward Connerly. blackamericans also DON'T have an O' as a last name either it's Mc or something else

@ Kathleen - Like much of history, the concept was just a marketing ploy to get more Blacks to take part in St. Pat's celebrations.
I really don't know the origin of Irish surnames for Black Americans.

Sorry, but Soledad is half Cuban, half Australian. The O'Brian came from her Australian father, who emmigrated in the 1950's. Don't mean to burst your bubble, but she's not Black.

Soledad is of Afro Cuban heritage / reason behind her darker complextion. We are not trying to claim her she admits it. This is why she is part of the Black Journalist Society/etc, and recognized / wins awards from Black organizations etc. Most cubans are basically an extention of black folk -- Cubans today and over the last 500 years are majority black, mulattoes or spanish with a mixture of black due to hundreds of years of interracial dating. Slaves (Blacks) were in cuba back in 14xx thanks to Christopher columbus before they were here in the US. So - sorry to burst your bubble Mrs. Go pick up a history book.