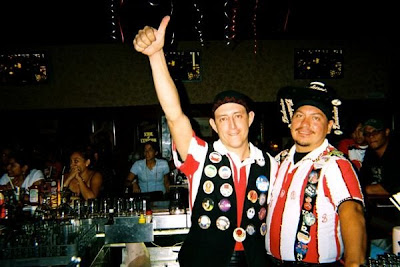 No, that's NOT me.
I don't even know the guys.
I just pulled the photo from the Friday's site.
But I did have to wear that ugly uniform.

But the thing about working at Friday's is that we made money.
Since we served food until 1am, when other restaurants closed - those employees would come over and spend their tips on me.

But the worst days were the holidays.
Why? Because everyone would take their mothers, girlfriends or whatever out to a spot that was one or two places better than their regular haunts - but tip in the same percentages from their normal spot.
(Our regulars went to Ruth's Chris, Ruth's Christ's regulars would go to Spago, and we would get the Denny's regulars.)
Most people went to a spot that they really couldn't afford.

The past few decades have been like Mother's Day.
Too many people had jobs, homes and cars that they really weren't prepared to have.


That the economy went south is no surprise.
It should have been expected.
The only real problem was that too many assumed that the holiday would last forever.
Posted by uglyblackjohn at 5:09 PM

When I bought my house, my dad said, "if you don't feel like you can't afford it, you didn't buy enough house." - Huh? That's one time I skipped his advice and bought a house I knew I could afford on my income alone.

smartest thing i ever did was not buy a house. I may not own anything right now, but I dont owe anyone anything either.

I get a job in Cali, I'm gone. Job in Bali, I'm gone. No worries about selling a house for a loss. I lost the job but it will not mean a reduction in assets.

It feels like you are still on the west with me. I told everyone the gang problem has left south central and moved to the IE. Now all that's left are central americans.

It was the era of the upgrade as people bought every perk possible. I'm just happy I realized I couldn't play or I would have been one of those stories.

People said the best thing to do was to buy a house....long term wealth. People graduated from college and showed their wealth (realistically it was first time jobs compared to poor college students-of course it looked like they were rich) making us think that we need to get jobs making lots of money rather than jobs to make us happy. People said that credit was suppose to help us live the American Dream. People lied to us but I can't blame them because America lied to them. The American Dream is fallacy. It's an advertising tool for us to buy cars, houses, boats, plastic surgery and lord knows what else.