Not Qualified For Racism 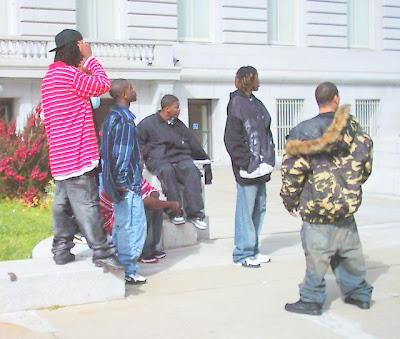 Okay...
Assuming that these kids are not;
All star athletes,
Academic All Americans,
Or (legal) entrepreneurs.

Many people scream racism (or any "ism") when in reality, they don't qualify for it.
Red-lining Black people who are trying to buy a home and steering them to higher interest loans is racism.
Black people being too poor to buy a home is not.
Not getting a job because of one's race is racism.
Not getting a job because you are unable to meet the minimum standards is not.
Being arrested for a crime is not racism.
Being profiled and treated differently is racism.


* I really have nothing to say to her parents regarding her. Her upbringing and moral compass were set by them.
They planted a flower - and now they're mad because it isn't a fruit baring tree.
Posted by uglyblackjohn at 11:44 PM

Like I always say we have to get there to really see racism. Right now the racist reputation of the past is becoming excuses for people today. There are so many options around for people that they don't even know how to just shutup and move up. But you're right if they never get to the point where racism can really be exerted they cannot complain about the use of it when they are just lazy and uninspired.

Despite how racist people are or are perceived to be we can still move forward. It's just people want a excuse that can't be verified or disputed. There isn't a race kit like a rape kit. So since we know racism can happen we just agree with their reasoning.

Well as i always say there are a number of healing steps that need to be taken, by us as Americans and us as a race. Many POC don't feel they should have to speak well or be on time, they have it in their heads that "ebonics' should be acceptable because someone sold them that as a culture, and when you dont respect that culture they see it as racist...

well laid out. Not being able to "act a fool" and get away with it is not racism its excuse making.
but...
assuming someone with a sideways hat will act a fool smacks of racism. Repeated contact with POC acting a fool makes racists feel justified and helps breed new ones.

Many Cops start out as fair minded do-gooders, then deal with the lowest common denominator consistently enough to start making assumptions. Many of thse assumptions are racist.

Point being the crew in your picture may not be sufering from true racism but they may be breeding it.