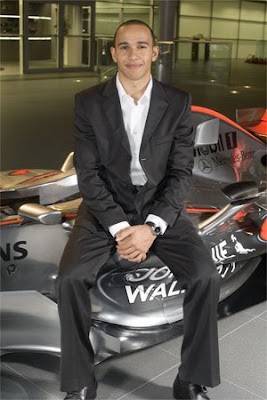 Rush Limbaugh doesn't really have a problem with Lil' Kim or Barack Obama - The Fat Boy really has a problem with them being black and doing well.
Some people just get mad when other people (whom they view as "less-than") seem to have a better life than their own.
(Think; Fuzzy Zoeller and Tiger Woods)

Lewis Hamilton (above photo) is set to take over where Micheal Schumacher left off in the sport of Formula 1 racing.
(That and he's dating the lead singer of the Pussycat Dolls.)
Maybe it's the non-Black girlfriend that has some Europeans so upset with the guy. 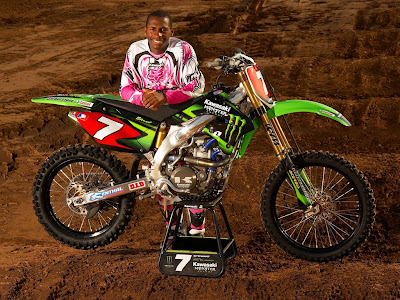 Moto-X star James Stewart has been whoopin' ass for a while now.
My cousin Ray-Ray and his boy Floyd are into riding - and in turn, I was always around the sport (Although I can't ride myself). 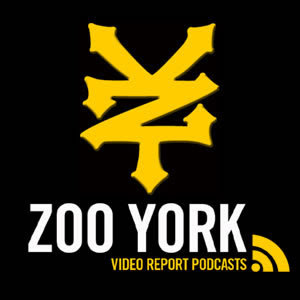 And don't forget the Zoo York Skate Team (and product line). Lupe Fiasco is given credit for making skateboarding more palatable for some Blacks - but this team does it big time.

Are any of these people "Acting White"?
Or are they just expanding the definition of what it is to be "Black"?
Posted by uglyblackjohn at 2:33 AM

how bout they just doin they thang?

I remember watching Tony Hawk skate in a Police Academy movie. Those were the good old days.

I would love, LOVE, to see an African-American girl rippin up the pro-surfing circuit.
We all have dreams.

@ brohammas - Does your daughter surf?

The first ones always are seen as acting white until enough blacks get in there and tweek it a bit. We'll see what they bring to their individual fields.

Everything is deemed to be white if that's the only people in the sport. Right now there a couple of brothers in Hockey but until it becomes significant mass then most people will think it's white.

None of them are really white it's just the masses are white so eating ice cream might be deemed white too.

FreeMan has a great point, but most every black person eats ice cream, so maybe kiche or better yet, eating beef jerky is white.

UBJ, I would love my daughter to surf but someone else will need to teach her unless somehow I get a job on a coast with waves and my childhood dreams of impersonating Johhny Utah in Point Break are finally realized.
She does start snowboarding next year.

IMO Black should be tied so much in what you do as it should be tied in who you are (how you identify and are identified). With that in mind, we shouldn't accept the limitations placed on us nor should we put limitations on ourselves (in terms of activities we can engage in). If people like Rush want to hate, let them hate!