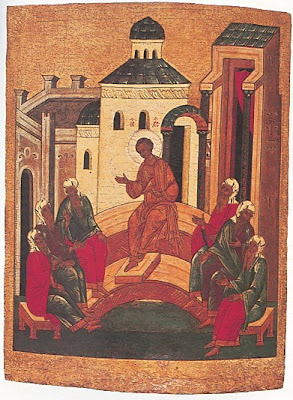 John 7:14 "Now about the midst of the feast Jesus went up into the Temple, and taught"

Most people hate (or love) church because of the floor show.
"What was sister Bertha wearing today", or "Did you hear the choir?" are all most people can talk about after the services.
Most of the rhetoric has become a symbolic exercise done by rote.

But what about having a small building with one bible.
Everyone could take turns teaching and defending what they've learned in the past week.
There would be no official "leader" - only he who was appointed as having to teach on the topic given for that week.
The group could take up a collection to be given to any member of that group who may need financial assistance.
If no one could be found among them - they could decide on a charity or foundation to which to donate that week's collection.

Even if one discounts the ceremony and tradition involved in most formal contemporary churches - they could still take away moral, social or historical lessons from the newer (but seemingly original) versions of these sessions.
If an "unlearned" man such as Christ could just stand before the Temple during his times - when did we decide to give the power over our own salvation to "leaders" who don't know anything about our lives?
When did being a profitable church become more important than being prophetical?
Posted by uglyblackjohn at 11:55 PM

I used to tell people I like moral people it's just I can't take the Jesus talk. Nothing wrong with the bible and talking about morals through parables.

Now money came into the church because a Hustler said people just give money for talking. People let me be in charge of it for speaking words of encouragement. People really don't expect results because if I couch it in God will do it when the time is right. Money came in once everyone allowed hustlers to speak when all they had to say was they have a calling.

As a child of a minister coming from a family of ministers, I know it takes money to run a church. That being said, we do have a number of "hustlers" who have the gift of gab, but are in no way holy. [see my post on the Archbishop Don "Magic" Juan-- http://soulbrotherv2.blogspot.com/2009/05/sunday-morning-services-with-bishop-don.html#links]

However, people see just going to church as the end all and be all of salvation. They listen to the minister but don't see God for themselves. They don't pray or read their Bibles. Remember Jim Jones and his disastrous cult? Had those people been reading their Bibles, they would have been able to spot the BS from the very beginning.

My grandmother was so poor when I was growing up that she had bare walls (no drywall) and a few missing doors in her home in Southwest Detroit. But she gave 10% of anything she had to the church.

I know that churches need money to operate, but 10% is a lot. And when did that become the magic number? And who decides how much of that money pays the salary of the preacher?

Ugh. Just more reasons why organized religion strikes a nerve with me.

@ FreeMan - Yep, from the Money Changers in the time of Christ, to The Catholic Church selling foregiveness in the form of Indulgences to the local pimp prtending to be a pastor - Many people still believe in God, Heaven and a difference between right and wrong.
They just have lost faith in the established Mega-Churches with mortgagae payments that are more than most induviduals would make in their lifetime.

@ Max Reddick - It's the "Shortcut" mentality.
Too many people expect others to do what they should b doing for themselves. (And then complain when things go wrong.)

@ RunningMom - Wasn't the money taken in meant to benefit the poor?
Wasn't that the original form of Welfare?
Even the government has enough sense to know not to over tax the poor.

UBJ - It always reminds me of that clip in Malcolm X where Bro. Baines says to Malcolm you know we have come up in the world and you know our people like to see that we are prosperous. He turned and said Bro. Baines is a two bit hustler but we are supposed to be preaching morality.

I think that conflict right there in the movie is the essence of the problem. There is a implied reward of abundance by GOD and most hustlers take that to mean money while those who are righteous know that means the congregation getting better aka progress!

10% became the magic number in the old testement when Abraham paid "tithes" to Melchezidek. Tithe means tenth. Sure it takes money to run a church but it does not take a paid ministry. ALL the tithes should go to building buildings and other temporal needs of the congregation/community. The "preacher" needs to get another job.
A true church does provide help to those in need. Google "bishops storehouse" and see what you get.
As Max said, attendance is not all there is... its a very small part (10% maybe:))
Helping others, learning your own doctrine, bettering yourself, all should be the focus of a church and what all its activities should be geared towards.

(come on UBJ, your post was like a John Stockton assist, I couldnt help but take the shot)

@ brohammas - Yeah... even if someone disagrees with some of the esoteric teachings of the Mormon church - their ways of doing things and their actions speak better of them.

(Stockton? Man... you could have at least brought your game MVP like Steve Nash.)