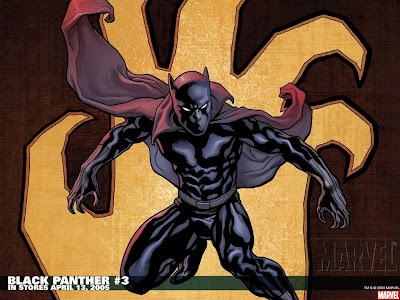 Maybe it's the imagery of a big Black guy walking into a room of criminals - the police would probably assume the he was one of the criminals.
He would probably be followed in the store where he is trying to prevent a robbery.
He would probably get a DWB ticket in his Blackmobile.
He would probably be shot while smoking a blunt in his driveway of his suburban home.
But is this imagery limited to how some whites would react?
Or do many Blacks think that certain aspects of society are off limits to them?

I wasn't really asking about the existence of a SHOC.
I was asking if the "concept" of a non-white superhero (Or; Rhodes Scholar, or CEO, or Meta physicist, or... until recently... President) was one that many Blacks couldn't imagine.
Why does Black always have to mean ghetto (Even to many Black people).
Why is "The Black Experience" often seen as a bad experience?
Why is; having both parents in a suburban home, going to an elite grade school, high school and college, getting a good job, raising a prosperous family, and generally doing well - seen by many as NOT a Black way of life?
Why can't Black be the standard of excellence in more than just sports and entertainment (excluding Tyler Perry)?
Posted by uglyblackjohn at 10:47 PM

T'Challa is one of my favorite superheroes. i am going to have to do my month of superheroes again. Educate about the Afrocentric heroes running around out there.

It's because we are a group of people who look at our problems from the bottom up. Just like the chitlins you eat we don't throw anything away because we are afraid to create new standards. Instead we take the 3% and we blow that up as progress instead of failure. We take one guy who makes it to be president and celebrate like the German walls are coming down. We take Denzel winning an Oscar for a negative role and we celebrate and give out awards.

So the answer to your question is because we look from the bottom up. If we ever decided to say this is what we want to create and how do we get there it will scare the hell out of people. So instead we say we need community centers, and teen pregnancy outreach and after school tutoring and convict retraining instead of saying shit lets just make sure they get a good education and in 10 years all these problems will disappear.

Most people can't envision it UBJ! They think in terms of dreams not in terms of rational steps. They feel lucky instead of accomplished, they feel blessed instead of putting in work and finally getting it done. We take the bottom up view on our race and thus our progress reflects this hopeless mentality.

PS. Yes I'm up late but it's only 11pm on the West Coast and I can't go to sleep out here yet. I might have to go and get some beer!

Maybe Freeman is right. Maybe we (as a people) are looking at things from the bottom up and when we (as individuals) dare to change our perspective and view something from the top down, the bottom-uppers harness their inner crabs and try to pull us top-downers back to their level (perspective).

Because my friend,
That is the way of life for America. Remember, if an older Mexican American dude was interviewing a Young Black dude for a job would he assume that the Young Black dude came up rough or in a suburban Cosby like situation?
We are supposed to be at the bottom as far as America is concerned. The system still runs on that program even though the programmers have long since been deleted by Life.
Jaycee