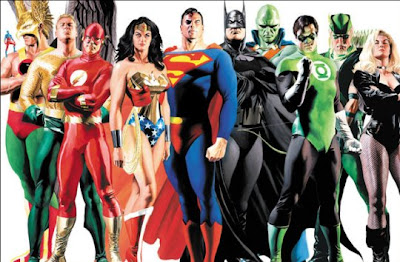 Okay... so there apparently are no Super Heroes of Color.
I guess they're too busy fighting against racists and racist stereotypes.
Well, at least the Silver Surfer was kind of Black (Lawrence Fishburn voiced).

The thing is... these people don't really know each other.
Each has overcome his own demons.
Wonder Woman is chillin' with a bunch of other tall women on her home island'
Batman has a nice mansion but chills in his Batcave,
Superman has his fortress of solitude,
and who knows where The Flash lives? (The fastest man on earth couldn't be a brotha'?)

The point being - all live their personal and separate lives.
They only come together when something big happens - like the filming of a movie or animated series.
Or by happenstance - like the Surfer being stuck on Earth.
This many high powered egos couldn't function in one locale.
All are great.
All are "The Man" in their world.
But all need to be separate for their abilities to function at their peak efficiency - otherwise, they would cancel each other out.
Think about it the same way as Christ did when he sent his disciples to different parts of the known world.
If all would have stayed in the same city, nothing could have grown.

Think of the Illuminati, Bilderberg Group, IMF, major corporations or any ultra-powerful group seeking only to retain their power.
This type of power corrupts.
Even if well intentioned, this type of power becomes oppressive.
This is the message behind the Tower of Babel tales.
Posted by uglyblackjohn at 1:13 AM

There might not be a ton, but they do exist. The Green Lantern is (now) a black guy even though he wasn't always. One of the superheroes in The Incredibles was a black guy (Sam Jackson), unfortunately not the main character (he needs his own movie!) Anyway - Check this out:

I think the Brown Hornet paved the way for new Super heroes... how many of the Super Heros in the picture were created after 1950?

Marcus Garvey or York would be my super heros... OK so I have a soft spot for Captain America, he had a motorcycle.

Oh I got the hookup site for you then to explore and talk about where are the black superheroes then....

Bam just like the old 1960 batman and robin flicks. I think the cat who runs that site can answer any of your questions.

There are indeed black superheroes. It's just that (until fairly recently) they haven't been as hyped up as their white counterparts, which is kind of understandable given the demographics of the target audience). The major comic publishers are making moves (albeit very slowly) to remedy the dearth of color in the superhero population in their respective universes.

Did you know that (as a result of a little exercise in retroactive continuity on the part of Marvel Comics) the first Captain America was a black man? True Story ---> http://en.wikipedia.org/wiki/Isaiah_Bradley

The secret origin was fleshed out in a popular graphic novel put out in a 2003 limited series called "Truth: Red, White, and Black".

lol, no not a "FanGirl", just a mom of a 13 year old boy who loved(s) ALL things "Superhero". He was the kid that wore costumes every day, not just for Halloween. And unless we had somewhere special to go, I let him!

I loved Milestone comics and Tribe! But what about John Stewart Green Lantern? Why has no one pointed out that the real Amazons (Wonder Woman) were Black Female Warriors who cut off one breast, for the Bow off the island of LESBO? What about the fact that Diana was another name for Nimrods Wife Semaramis? (Euphrates/Tigress River, Probally Black)? Oh Well.
Jaycee

I loved Milestone comics and Tribe! But what about John Stewart Green Lantern? Why has no one pointed out that the real Amazons (Wonder Woman) were Black Female Warriors who cut off one breast, for the Bow off the island of LESBO? What about the fact that Diana was another name for Nimrods Wife Semaramis? (Euphrates/Tigress River, Probally Black)? Oh Well.
Jaycee