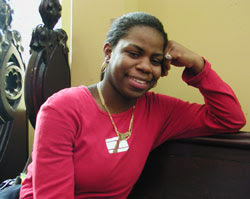 So Chanequa Campbell gets dismissed from Harvard - Why?
Is it because she's Black?
Probably not.
Is it because does not look like Rihanna or Solidad O'Brien?
Probably not.
Is it because her name is Chanequa?
Probably not (Oprah Winfrey, Barack Obama and Eldrick Woods all have uncommon names.).
Is it it the Vick/Pac Man Jones syndrome (When keeping it real goes wrong.?
Maybe.
But really it's a combination of all of the above.
When you have that much going against you (socially speaking) - you walk a tight rope.
Is it fair? Nope.
But that's just how things are. Sometimes one can just get caught up. (Kind of like being an overweight poorly spoken Italian man who lives in New Jersey - People are going to think "Mafia".)
Sometimes the images associated with one's public persona are often given more weight than one's accomplishments.
Was she involved with the murder?
I don't know.
But is her name, plus her looks, plus her race, plus her associations even more to blame?
More than likely, yes.
Posted by uglyblackjohn at 11:53 PM

What is very strange in all of this is that Brittany Smith, the girlfriend of the suspect and also a Harvard student, was not dismissed. Don't understand this logic - at least not yet.

@ SjP - Brittany doesn't SOUND like a muderer - Chanequa does.
(I couldn't find a photo of the Brit)

I'm still out on this one, I read your post then did a google search to try and get some more information. I didn't turn up much. I certainly hope that if this woman didn't have anything to do with the murder that they allow her to graduate. Unfortunately the damage is already done.

@ RunningMom - If she is found to have no connection to the case, she'll be a victim of the 'Grand Slam of Unfortunate' in America (Big, Black, "Ugly", Ethnic Name) at a WASP-ish institution.

But what factor is more to Blame;
Name,
Melanin,
Associations,
Appearence,
?

1. Harvard is not a waspish institution. We have equal or greater numbers of blacks, asians, indians and jews. I would put the percent of WASP's at about 12% and not all of them are from blue blood families.

2. Would harvard have barred her from graduating if they didn't already have the goods on her? She was already caught commiting check-fraud and robbing another student. Harvard likely found sufficient evidence that she has been dealing drugs over the last several semesters. It's unclear whether or not Chanequa was involved in the murder/robbery but Harvard already had more than enough reason to give her the boot.