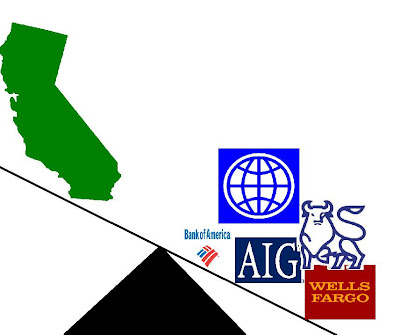 California isn't the only state with financial troubles.
When the livelihoods of a few thousand bankers becomes more important than the livelihoods of millions of citizens,
We're in deep trouble.
Q: What could we have spent the two to four TRILLION dollars on - instead of bailing out bankers who lost theoretical money on a high risk craps game?
A: We could have paid the country's total outstanding credit card debts (estimated by ABC News at $960 million).
And the outstanding student loans in all of America (est. $900 million).
And given Five Hundred Billion Dollars to the better managed local credit unions to buy the bundled (and bungled) toxic assets from the "experts" on Wall Street.
And given Five Hundred Billion Dollars to the states to offset their budget woes.
AND still had One Trillion Dollars to give One Million Dollars to One Million People (Creating a whole lot of new money millionaires overnight).
So in spite of these ridiculous answers -
Which way would the country be better off?
Posted by uglyblackjohn at 7:23 PM

We know what this is and the masses of people know something is wrong. The issue really is it going to change and the answer is NO! I read they could give every one in the US 30K with the money and that would definitely make the economy rebound. But they aren't giving it to you to make these decisions they'd rather give it to the bank so they can make money off of you again.

We know the game is rigged so what are you going to do about it?

Be nice to get my student loans paid off. Oh well, I think of that as "good debt" - at least I will have my degree.

Of course if they are going to give money away I will gladly stand in that line.

The absolute capitalist hierarchical make work food production system is in the process of a massive livestock consolidation.

Since the herds are no longer likely to yield a profit, what possible motive does the Farmer Brown (bankster) have for maintaining the herd?

If the herd was deemed useful, then Farmer Brown would have declared a jubilee. The only way out of this mess is another world war, but this one massively more destructive than anything witnessed since the "mythical" time of the Mahabarata when vimanas were recorded as having brought the sun down to earth...,

@ FreeMan - Yep. Many thought that Obama was the man to right some wrongs - not just add another level to the existing problems.

@ RunningMom - I said to PAY OFF student loans. May as well help those who are trying to help themselves.

@ brohammas - Yep. But that's not what I'm saying.
No one would be given money directly. They (those who are trying to do better for themselves) would just be free from a lot of debt.
Less debt... less stress.
Less stress... better life.