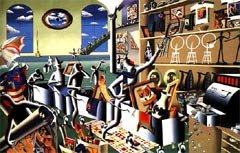 I've been reading a lot lately about how different people are preparing to survive or even thrive in our current economic downturn.
Most people have been poor to working class - so what's the problem?
Have we forgotten our roots?
Maybe it's time to get back to basics.

The hustlers always make a living.
I'm not advocating cheating people.
When I say hustle, I mean work.

When you're not making money, chances are that you're spending money.
I thought that I could retire early, but even that gets boring... and expensive.
I'm now working construction. I hate construction.
I used to charge people a very affordable $25 hr,
but being that I was usually only called when someone else had already effed something up, I raised my price to $75 hr. .
But I get to work only when I feel like it.
Now here's where the problem started.
If I charge so much, people assumed that I must be worth it. I now have more work than I care to do.

People aren't buying new houses, they're just fixing and improving what they already have.
Since I tend to come across as competent, the people assume that I'm an expert.
(Did I already say that I hate doing construction?)
Most of the jobs are simple miscalculations on the original builders' part. They're simple fixes that require little effort.
I guess this is an example of knowledge being king.
Even in a down economy, things still have value.

Bartering seems to be making a comeback.
http://en.wikipedia.org/wiki/Barter
What do you have or what can you do that someone else wants or needs?
How can you use this to get something that you want or need?

The 'hood has always had it's own economy.
I think that's why so many crack-heads turn to prostitution. Many have minimal skills but they understand that what they do have has a value to someone else.
Every 'hood has a cool-cup or cookie/candy lady.
Everyone knows the local shade-tree mechanic or boot-leg plumber.
(But be careful, you usually get what you pay for.)
Everyone knows the local "baller" who lends money.
Even smart drug dealers learn to put a beauty shop or corner store in their sister's name.

During the market crash of the Depression, a small European town experimented with a scrip called the Worgle. The people understood that their work still had a value. The scrip was just a tool used to keep track of what one person or group owed another.

How many times have you done a favor for someone and they returned a favor to you in your hour of need?
Most would say, "many".
That favor had a value.

The failure of our current economic model is largely due to everything being disposable.
Nothing had a value.
This market correction will just be a shaking out of those who cannot produce a good or service that is actually needed.
Our economy collapsed because we placed too much value on things that had none.

The financial collapse isn't as serious as an ecological collapse.
We were getting to the point of no return, in terms of sustainable production.
Cheap and easy was taking precedent over smart and safe.
Our dumps and water ways are full of man-made toxic waste.
Our clean air is at a premium.
Pollution may be the cause of a smaller "tool-kit" in men.
http://www.news.com.au/story/0,23599,24768593-2,00.html
We have so much food in this country that we have a bigger health problem with over-eating than we do with under-eating (and the rising medical bills to prove it).
Technology and over hunting and fishing is causing many of our food sources to disappear.
Some genetically modified crops and animals are less tolerant of parasites and viruses (Much like humans becoming immune to certain strains of viruses due to our over dependence on hand sanitizers and antibiotics.).
Hummers in the 'hood was never a good idea.
We were buying all of the rewards of success without ever having really accomplished anything.

I just read today about one of the "Real Hoodrats of the ATL" losing her home. I hate to see anyone lose their home but her lifestyle wasn't sustainable for her. Her value system dictated that the reward was more important than the work.
For her it was better to seem than to be.

If you want to get paid;
Find a cheap, safe, renewable and readily available energy source.
Discover the next naturally occurring drug - like aspirin or penicillin.
Figure out a way to turn salt water into fresh water at a low cost.
Like coal, petroleum, penicillin (mold) and aspirin (willow tree bark), the answers ARE already out there.
We just need to figure out how to use what we already have..
Posted by uglyblackjohn at 7:23 AM

My husband has freelanced and bartered his work for years--it's great; we've ended up with everything from cases of wine to framed lithographs. I agree with you about sustainability.

Yes, yes and YES! I love the concept of free trade and if you have dependable folks in your circle this will become so much more common over the next few years.

@ Cilicious - The first person to ever read any of my posts! Thanks for stopping by again.

@ RunningMom - WE should know how to get through the rough times. WE shouldn't panic.