Hawaii born Japanese American Eric Shinseki was named as the nominee for President-Elect Barack Obama's cabinet as the secretary of Veteran's Affairs. The double Purple Heart winner is best known for his Cassandra Complex relating to the Iraq War - warning; "Beware a 12-division strategy for a 10-division army". 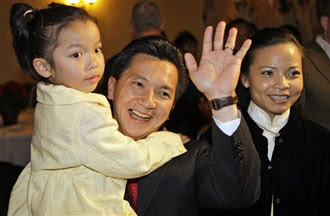 Filipino Manny Pacquiao effectively beat "The Golden Boy" Oscar DeLaHoya into permanent retirement this past weekend in Vegas to claim the tittle "Best Pound-for-Pound" boxer.
I have no fixation or fetish for Asian women (although some (well...many) are damn sexy).
But in an environment where many of us Blacks are seeking to redefine our ideas of what a certain race or culture is - we may want to start viewing other cultures as valid too.
CVT at Choptensils has a great piece on racism and different perceptions of what is "History".
http://choptensils.blogspot.com/ On The Invention of Racism; Part I
Dark Ages?
For Whom?
Posted by uglyblackjohn at 2:06 AM

Again, thanks for the link, as well as the hat-tip to the Asian folks, but let's be easy on the references to the hotness of Asian women. Just saying.

But, really - I think it's on all sides that we don't pay enough attention to each others' accomplishments and cultures, and I think that's largely by the design of the current system. Because honestly - if you were a rich white guy that had all the control, would you REALLY want all the folks of color getting along? Hell no.

So let's see what we can do to buck the trend and send a little fear towards the top . . .

Of course the Asian cultures are valid too.

The one Asian dude I went to high school with was pretty cool.