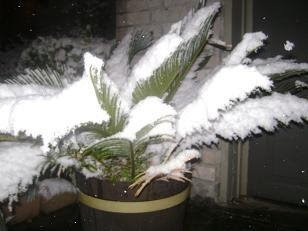 We just had a hurricane about two months ago, now we have snow!
Snow?
In Beaumont, Texas? 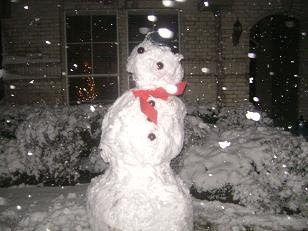 I've finished all of my Christmas shopping and I wasn't feeling Christmas this year. I have a floor full of Christmas decorations that are just waiting to be put up.
But snow near the Gulf is rare.
One of my young cousins says that it is because Obama got elected.
Another blames it on Global Warming.
Okay, I'll admit, the snowman is pretty weak. But what do you expect from kids who had never before seen snow in person.
The school district just called everyone's house to report A SNOW DAY?
Posted by uglyblackjohn at 4:15 AM

to have enough snow in Texas to make any type of Snowman is amazing...it is pretty ugly though...lmao

I cannot believe you got enough snow to make a snowman!

You did a good job other than his eyes being a little crooked... lol.

Oh and he needs arms.

Yay for snow days! I hope everyone stays in the house because you know that "ya'll Texans" can't drive in the snow.

Is your young cousin saying hell has frozen over?

Yea...It's pretty bad but they had fun.
@brohammas - I think so.

We read about your weather in wonderment!

Have fun but drive carefully!