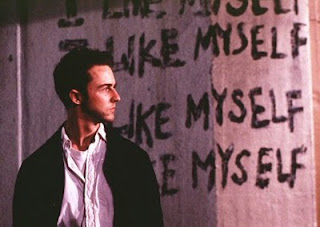 No, I'm not saying that everyone should quit his job, blow up his home, create an alter-ego and then start fights with random people in the hope of changing the world - that just won't do.
But Fight Club did have a good simple message - to just let that which really doesn't matter slide.

But the side-effect is that any successful sustainable counter-culture becomes the new oppressive popular culture.
Posted by uglyblackjohn at 11:11 PM

You know what the opposite of hate is? It's not Love it's actually not caring at all. The absence of emotion is the opposite to a strong emotion..

I say that to say the counter culture may not be counter at all it might just be another culture. So there really isn't a chance someone will do unto you what you may have done to them. It's more than likely the new culture will just be what it is.

But the side-effect is that any successful sustainable counter-culture becomes the new oppressive popular culture.

In Saturday's Giving Up the Gun post, I linked to a pro and a con discussion of the motivation behind the Tokugawa Shogunate's rejection of firearms, and maintenance of a multicentury firearm free society.

In your opinion, was this done to preserve an authentic culture of competency in which advanced jedi (samurai) skills were preserved and cultivated - or - as the pubmed critic argued, was it done exclusively to preserve oppressive elite rule? Interesting side note, Edo period Japan was an exceptionally advanced culture that maintained zero population growth and an ecologically sustainable footprint for over three centuries.

(Did elites cease to rule after bushido was retired in the 19th century?)

perspective perspective perspective. Most of the white SOuth Africans I know feel thier country was ruined when apartheid ended... while short sighted, their opinion is in many ways true. The economy tanked, crime spiked, and all the privelege they (the white folks) was gone. For them, ruin.
Now for black people things got better by leaps and bounds.
whether a culture is counter, whether an ad campaign is evil... all perspective.

The psychopathic perspective of totalitarian racist parasites must be automatically discounted by sane human beings.

The collaboration between Israel and South Africa on nuclear weapons and ethnic bioweapons marks the apartheid government of Israel as a parasitic psychopathocracy permanently outside the bounds of sane human discourse and sane human consideration, as well.