Media Bias / No Touch-up For Palin 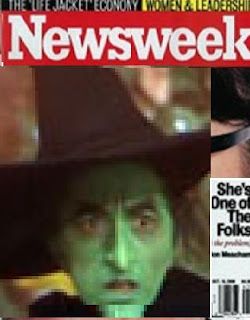 What's the controversy?
So Sarah Palin was pictured on a Newsweek cover without the benefit of a photo shop master. It is October after all and Halloween is just weeks away. Maybe it was in keeping with the holiday spirit.
The uproar over the unflattering photo (warts, mustache and all) is the latest effort of a desperate McCain/Palin ticket - to focus the pundits' attention away from the REAL issues of the campaign.
(NOTE: Not the real cover photo)
It's odd that the state of our political environment is one that seems to only focus on appearances and rumours, and not the little and frightened man behind the curtain who is pulling the strings.
I'm offended by the Obama cover. Why is it in black and white? Maybe to make Obama's Blackness more evident? Maybe it is meant to show that our country is still separated by black and white. I'm not sure (and not really offended).

Why the McCain /Palin ticket seems to want to; focus on "Obama the Black Muslim terrorist", dismiss Palin's ongoing "Troopergate" investigation (the findings are set to be released Friday), dismiss Palin's ties to a group that wants Alaska as it's own state, dismiss the Keating friendship and try to turn our county's attention to unimportant issues like a photo shoot are beyond juvenile.
Truth be told - I, like many Blacks had to be convinced to vote for Barak Obama. His support in the Black community was earned by defeating a popular Democrat opponent who is married to a past President who held a great amount of clout in much of the African American community.
McCain was always a possible choice for me. His choice of Palin only added to my worries of having him as our next President. His campaign just seems to be imploding, along with our economy.
Posted by uglyblackjohn at 11:59 PM

I will tell you what the most telling thing about the McCain /Palin camp is for me. The number of people they have put out there to talk to the people and support them, these people given carte blanche to say whatever they want to say when praising the camp, and then the minute those same people say something stupid and the media descends on them, those same supporters are left out in the cold. the list of people who disappear from teh McCain camp continues to grow. way to have my back Johnny. Is this the same behavior you showed in the POW camp?

the reaching for straws