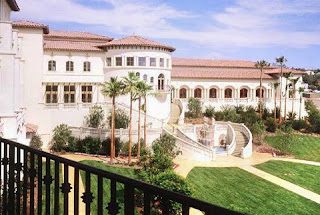 Many people were upset at the way many people from New Orleans spent their federal rescue cheques after Hurricane Katrina. Some evacuees spent the money on gold grills, some to get their hair and nails did (sic.), some at strip clubs, some on liquor and some just went on vacation.
I guess greed and selfishness know no race, gender, ethnic group or economic level.
AIG spent $440,oo0 at the St. Regis resort in Dana Point, California to get their nails done in order to be more relaxed in their efforts to spend our $85 bil. in federal bail out money. To be fair, $440,000 won't even pay one day's interest on $85 billion.
We the people now own an eighty percent stake in AIG - like Wanda Sykes said; "I want receipts".
(thanks, brightstar;)
http://2buppiechicks.blogspot.com/ 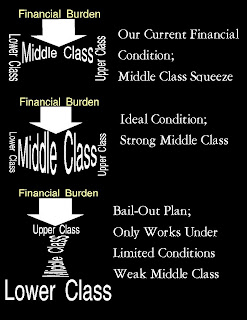 I'm still not sure how the bail out (rescue package) helps us.

As it stands today, our middle class is being forced to swallow a package that assumes that the markets will go back to working in their old paradigm. Didn't all of these "smart" people create this mess?

Obama's plan seems to be one of strengthening the middle class to the point of our economy being able to support any market conditions.

The bi-partisan House plan seems to be more of the same ideology that created this mess to begin with. A sell-out that only works under limited market conditions

I'm not in favor of a police state. The farther the government stays away from my day-today life the better. But - if someone robbed my house, I'd call the police and prosecute the robber to the fullest extent of the law. I wouldn't be expected to bail the robber out of jail. And to pay for his defense, and to make sure that he in a condition to continue to rob other people. WTF?

Posted by uglyblackjohn at 11:24 PM

That AIG thing has me hopping MAD! I stayed up last night watching CSPAN hearings and of course the former CEO's played the DUH card! I want my money back!

Their calling it a "retreat", I'm calling it corporate bullshit and entitlement.

Their calling it a "way to keep people from jumping ship when we need them to stay and work through the problems", I say, let em jump there's plenty of unemployed people more connected to reality that can help you fix your problems.

I for one, know how to budget. I'm a single mom that's never been on anyone else's dime or dollar. You need something balanced, I'm your girl. Pay me the same your paying that guy, I'll have it done in a year or less and retire.

Greed and corruption lead the corporate masses and when shit hits the fan they shrug and go play golf. That's what the insurance is for right?