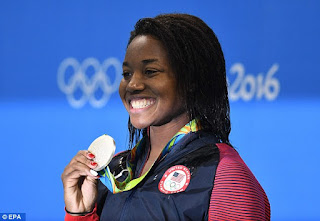 I used to swim as a kid. I learned to swim because I couldn't swim. That is to say that even after two stints at the week long sessions at our local YMCA I still could not swim.

We had a pool in our back yard and two pools in our subdivision and I refused to be the only child in my family who could not swim. I woke up early every morning and practiced not drowning every day for about a week. First on the steps then in the shallow end. Then I practiced floating, then holding my breath under water, then propelling myself from one end of the shallow water to the other. I surprised my mom about a month later by being able to swim the length of our pool.

My youngest brother had a rival in our neighborhood who he'd beat in everything. The kid's father couldn't believe that Black kids from the hood could be good in so many things. The kid's father wanted to save his son's pride so he invited us to try out for our local AAU team. The kid finally had something at which he could beat my brother. But this did not last long. After a time we were qualifying for A and AA meets. I sucked. I topped out at barely qualifying for JO's but both of my younger brothers competed at the NJO level.

So yeah, this year in Rio I was pleased to see Simone Manuel win gold as a Black American swimmer.
But I also played water polo. Though I managed to letter as a freshman and started as a senior in high school (I only played two years)  I wasn't very good. So again, I am paying attention to Ashleigh Johnson and the women's Olympic team and their quest for gold.

Rap Genius cites nine name-drops of Michael Phelps in rap lyrics. I never really payed attention. Maybe it was his weed smoking that caught their attention?
But looking at my club's newsfeed on Facebook, maybe it's his domination that makes him relevant for a group that most wouldn't think would be paying attention. 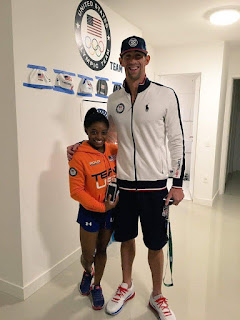 Okay, I could understand this - a cute shot of the tall Phelps and the Short Biles. 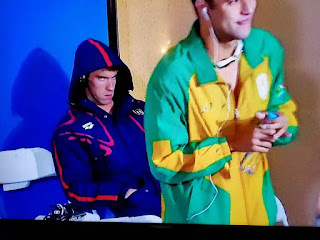 But my club's page also had Phelps throwing shade. 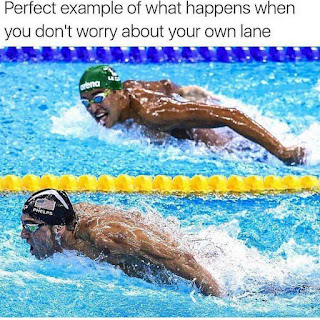 And this meme was a Black favorite.

Back in high school the basketball team and coaches would watch me swim. Seeing a Black swimmer who would actually win was not common. In water polo I was a bit of a Prima Dona. I'd start, score, sub out to talk to my football friends in the stands, sub in, score, sub out and go back to hanging out with my friends.  I was just playing so that I could show off.
But swimming and water polo were  NOT 'cool' sports at my school. Most of of the other participants were only second or third tier popular.

So yeah... Seeing so many Blacks paying attention to swimming matters to me. Maybe twenty years from now we'll see an American team filled with those from many races.
Posted by uglyblackjohn at 5:58 AM