The Problem With Romney 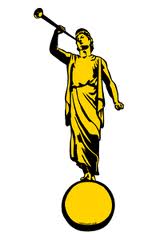 Romney's only problem is that he is a Mormon and, to many, Mormonism seems like a religious cult.
While many Democrats were willing to overlook the possibility of Barack Obama being a Muslim - many Republicans cannot fathom having someone from a fringe religion being their candidate for the office of POTUS.

Posted by uglyblackjohn at 9:44 PM

Interesting that Mormonism is still a fringe considering the huge increase in American membership and decline in traditional Christianity over the past decades.
Perception trumps reality again.